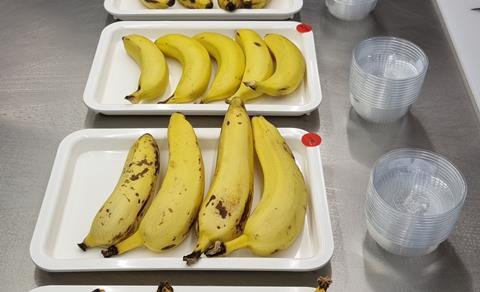 Minister for agricultural industry development and fisheries Mark Furner said consumer research had identified four new varieties of the Goldfinger banana with the potential to satisfy both consumer and grower needs.

“Since 2016 DAF researchers in Innisfail have been working to unlock the flavour of the Goldfinger banana variety which is known to be resistant to key Panama disease strains including TR4 but had limited taste appeal,” Furner said.

“Earlier this year 234 consumers took part in a series of tastings to assess five new varieties of Goldfinger bananas with four of the varieties scoring equally well with existing commercial varieties of Cavendish and Lady Finger bananas.

“Tasters liked the mild, balanced aroma, flavour and texture of selections which were equally popular among those who prefer either the Cavendish or Lady Finger varieties.”

“Overall, the reviews were positive but well summed up by one taster who described the Goldfinger bananas as a ‘super healthy and delicious snack’ that they would look forward to eating,” Moller said.

“Tasters liked the balance of sweet and sour taste in the Goldfinger bananas with one noting that the fruit had a ‘complex flavour with notes of citrus, confectionary, and tropical fruit’.”

Moller said other comments from the tasters included that the Goldfingers had just the right amount of sweetness, the texture and flesh colour of the banana was very exciting, and that they would be fantastic in a fruit salad.

“My favourite comment came from a taster who said they were reminded of banana lollies and thought they could be marketed as ‘sweet confectionary without the naughty numbers’,” said Moller.

Furner said consumer acceptance of the new varieties of bananas meant Queensland was a step closer to protecting the state’s banana growers from Panama TR4 disease.

“The next phase of research will include demonstrating that the selections have retained their Panama disease resistance and implementing large trials on commercial farms under commercial production practices.

“Although commercialisation of any new varieties is still some years away, the signs are promising and these Goldfinger varieties shape as a win-win for growers and consumers.”