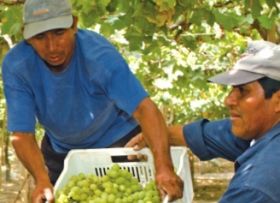 Brazil and Peru are emerging as important suppliers of table grapes to North American market as importers turn increasingly to both countries to fill the crucial October to December supply window.

According to the US Department of Commerce, exports of Brazilian grapes to the US increased by over 700 per cent (from 195 tonnes to 11,076 tonnes) between 2002 and 2007, while Peru’s exports have jumped by nearly 178 per cent (from 3,722 tonnes to 6,608 tonnes) for the same period. Because of geography, Brazil ships only to the east coast of North America, while Peruvian fruit enters ports on both coasts.

Brazil’s season typically begins by October, the first arrivals landing on the US east coast by the middle of the month and lasting for about six weeks. The major varieties grown are Festival, Thompson Seedless and Crimson Seedless. The Peruvian deal usually gets off the ground about a month or more after Brazil’s, with shipments to the US and Canada of Thompson Seedless, Superior Seedless and Flame Seedless running through to the end of the calendar year.

The fact that Peru is able to ship preferred varieties of table grapes several weeks before Chile has made for considerable market penetration in North America in recent years.

“The Copiapo deal in Chile for Perlettes is dying,” said Guy Milette of Courchesne LaRose in Montreal. “Peru is already able to supply excellent quality Sugraones at the same time, so there is less and less interest in Copiapo every year. Also, Copiapo is a high-cost producing area as water is very scarce there.”