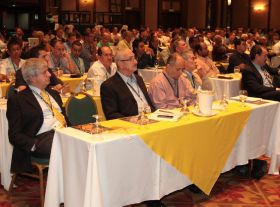 The global sourcing strategies adopted by some of the world’s biggest supermarkets are adding value to the banana supply chain through the creation of long-term partnerships between producers and retailers. This was the message delivered to delegates on day two of the V International Banana Congress being held this week in Costa Rica by Leo Cruz of Tesco and Patrick Haines of Walmart.

Speaking in a lively session on the role of the supermarkets in the banana value chain, Cruz, Tesco’s commercial sourcing manager for the Americas, said the retailer’s Group Food Sourcing (GFS) division, set up in 2010 to deliver a more streamlined system of food procurement, meant the company now sourced 100 per cent of its bananas direct from growers. In Costa Rica, around 40 per cent of Tesco’s banana volume now comes from growers who produce exclusively for the retailer.

The result, said Cruz, had been mutually beneficial, allowing Tesco to cut waste and pass cost savings resulting from greater efficiencies and economies of scale on to growers. “We want customers to trust our brand, our products and our growers, for the mutual benefit for all members of banana supply chain,” he said.

Haines pointed out that although Walmart had a well-developed global sourcing programme this was still relatively young in terms of fruit. Nevertheless, he said the strategy had already allowed the retailer to create strong relationships in the world’s biggest banana producing countries and given it a valuable insight into the market. It was, he said, a win-win-win situation for Walmart, its customers and suppliers.

However, a number of delegates questioned this scenario and pointed to studies showing that growers received just 2 per cent of the sales price compared with the retailer share of 40 per cent as proof that income needs to be shared more equitably along the supply chain.

Jorge Sauma of Corbana stressed that sustainable production comes at a cost. “If consumers want a more ethically sourced banana they should be prepared to pay for it,” he said.

Cruz insisted that the price Tesco set in its stores was not linked to what its growers received, and that the retailer’s bananas suppliers were paid the same, if not more than the official Fairtrade price.

Responding to the accusation that the retailers were stripping value out of the industry in the same way as the multinationals had once done, Haines said closer collaboration between supermarkets and producers was about finding ways to sell more bananas in a more efficient way.