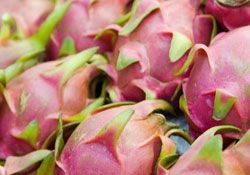 The government of the Dominican Republic has set up a programme to promote the production of dragon fruit as part of a wider strategy to diversify the country’s export offer.

Speaking at a press conference where the scheme was unveiled, agriculture minister Luis Ramón Rodríguez said dragon fruit is highly sought after on international markets, particularly the US East Coast where strong demand exists among the region’s ethnic Asian population. He also noted that its cultivation was well suited to the smallholdings that characterise agricultural production in the Caribbean country.

“Dragon fruit is an interesting option for growers looking to diversify their export portfolio and boost returns,” Rodríguez said, adding that 10ha of production would generate enough income to support a family.

The Agriculture Ministry has approached the country’s Banco Agrícola to try and secure funding for a pilot project in two zones with a view to rolling out production to other regions in the future.

Starfruit and guava are among the other exotic fruits the government is looking to grow for export.