Non-browning apples land in US stores 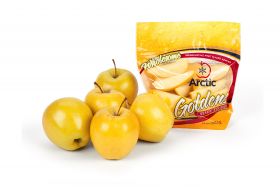 Okanagan Specialty Fruits (OSF) is gearing up for the first commercial crop of its non-browning apples this autumn.

Marketed under the Arctic Apples brand, the genetically modified fruit, which is engineered to resist browning when sliced, has already caused quite a stir in the US since being trialed through consumer research and taste tests earlier this year.

The apples have been engineered using a gene silencing technique to dramatically reduce the production of polyphenol oxidase (PPO), an enzyme that triggers the chemical reaction that causes browning when the fruit is sliced or bruised.

According to OSF, a small agricultural biotech company based in Summerland, British Columbia, this is a precise change that doesn’t alter the other characteristics of the fruit.

There are approximately 80ha planted in Washington State and this is expected to double next year. “We estimate this initial crop will be in the range of 9,000 tonnes and plan to increase output in the coming years until we have sufficient volume to meet international demand from major retailers and the foodservice sector,” says president Neal Carter.

Three non-browning varieties have been approved for sale in the US: Golden, Granny and Fuji. Gala is next in line, with additional varieties being introduced further ahead.

This season the apples will be available in 10oz grab-n-go bags but other value-added formats are also under development. “This format best highlights the product’s unique non-browning and preservative-free trait and provides consumers with the convenience factor they really desire,” says Carter. “Moreover, studies show that children consume apples at dramatically higher rates if they are sliced.”

The apples will be available in a few dozen stores from October to December, or until supplies run out. Given the high level of interest from the foodservice sector, however, Carter is keen to develop this channel once production volumes increase.

A social media campaign and participation in trade shows and other events will support the brand’s launch.

Ultimately, Okanagan hopes to grow Arctic into widely recognised global brand. Following the initial US launch the label will be rolled out to the Canadian market.

In the longer term, the company will be seeking the necessary regulatory approvals to export to further countries. Although GM crops are banned in Europe, Carter is keeping his options open.

“Different countries across the globe typically have their own specific regulations and approval systems when it comes to foods improved through biotechnology,” he says.

“We have not yet started to pursue the process for gaining approval in any European country, but we are not ruling out any possibilities at this time.”

Similarly, Carter points out that while extending production to the Southern Hemisphere to ensure a year-round supply is an option, this is still some way off.