In spite of sendings to Europe increasing, Brazil has lost market share to Peru and Côte d’Ivoire 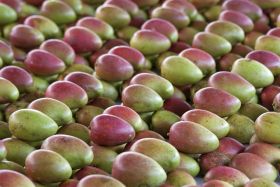 For the third year in a row, mango was the fruit that generated the highest export revenue in Brazil.

Figures from the Centre of Advanced Studies in Applied Economics (Cepea/USP) show that Europeans spent US$169m on Brazilian mangoes last year, most of them coming from the São Francisco Valley.

Between 2011 and 2016 the European Union registered a 32.5 per cent increase in the volume of mango imports from Brazil. The corresponding increase in value was 90.52 per cent, demonstrating that there has been a considerable rise in the average price of the fruit during that time.

Brazil was ranked as the sixth largest producer of mango in the world by the United Nations Food and Agriculture Organization in 2014, the last year for which data is available.

Between 20 and 25 per cent of the mangoes grown in the São Francisco Valley are sold overseas, with around three-quarters going to the EU according to the Secretariat of Foreign Trade.

In recent years Brazil has been adapting its varietal offer to suit the preferences of European consumers for less fibrous varieties like Palmer, Kent and Keitt, while the cultivation of Tommy Atkins has been decreasing.

In spite of the increase in Brazilian exports, the country’s share of the European market has been declining. While the total volume of mangoes imported by the EU between 2006 and 2016 has risen by 58 per cent, imports from Brazil have gone up by just 34.9 per cent.

Imports from Peru and Côte d’Ivoire, meanwhile, have increased by 113.9 per cent and 109.7 per cent respectively.

Part of the reason for this is that Brazilian mangoes are subject to an import tariff of 6 per cent while its competitors can access the market tariff-free.