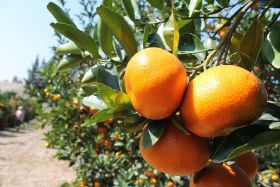 Camposol continues to expand its international production with the acquisition of 1,000ha of agricultural land in Uruguay.

The company announced that it has acquired 500ha of mandarin production that belonged to Citrícola Salteña in the department of El Salto, along with another 500ha of land yet to be developed.

Together with its 500ha of citrus production in Peru, the new farms will enable Camposol to significantly strengthen its mandarin offer throughout the entire Southern Hemisphere window.

“Being in Uruguay will allow us to become a mandarin supplier throughout the commercial window of the Southern Hemisphere, and thus better serve our customer through our commercial platform in the US, Europe and China,” said Camposol’s CEO Jorge Ramírez.

Earlier this year, Camposol announced that it had purchased an initial 350ha of land in Colombia for the production of avocados as part of its strategy to become a year-round supplier.

The company aims to produce its first commercial crop from Colombia by 2022, with volumes rising to 40,000 tonnes by 2025, matching its Peruvian output.