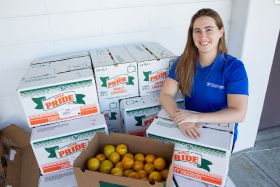 Christa Court, author of the report

Higher prices offset production declines during Florida’s 2016/17 citrus growing season and so the industry’s overall economic contributions changed little from 2015/16, according to a new report from economists with the University of Florida Institute of Food and Agricultural Sciences Economic Impact Analysis Program (EIAP).

Titled 'Economic Contributions of the Florida Citrus Industry in 2016-17', the report was formally presented to the Florida Department of Citrus this week, which commissioned the document.

The report covers economic activity from October 2016 through September 2017 but does not incorporate losses caused by Hurricane Irma, said Christa Court, EIAP assistant director and one of the report’s authors.

Although the storm struck Florida on 10-11 September 2017, by that time Florida’s 2016/17 crop had already been fully harvested and, thus, Irma had no effect on citrus production statistics for the season, she said.

“We’ll see declines associated with Hurricane Irma reflected in the 2017/18 data, which we’ll report next fall,” said Court, who is also an assistant scientist with the UF/IFAS food and resource economics department.

"The bad news for growers in our report is that both production and yields continued to decline," Court said, noting that Florida citrus growers harvested 94.3m boxes of fruit during the 2015/16 season. "The good news is that even though there were about 15m fewer boxes harvested in 2016/17 compared with the year before, higher prices resulted in a small increase in sales revenues to growers.”

The increase from the 2015/16 to 2016/17 growing seasons was about 1.36 per cent in constant-dollar terms, Court said, adding that during the same period, employment and labor income decreased 2.18 per cent and 0.73 per cent, respectively.

Court cautions that, due to the change in methodology, statistics contained in this latest report should not be compared with results found in previous editions of the report series.

The primary reason for the continued decline in Florida citrus production, she said, is the bacterial disease Huanglongbing, also known as HLB or citrus greening disease.

First reported in Florida in late 2005, the disease has since become established throughout the state’s commercial citrus production areas. Scientists have not yet developed a method for conferring resistance to trees or curing them of the disease.