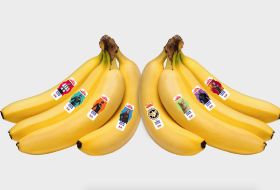 While Carol Danvers fights to save Earth from a galactic battle as Captain Marvel in cinemas this summer, Dole is celebrating other female superheroes for their battles waged a bit closer to home.

“Powering the Hero Within” (#DoleHero) is a 10-week empowered-living alliance between Dole and Marvel’s Captain Marvel inspired by Danvers’ dramatic transformation into the title character of the much-anticipated film.

Taking its cue from Danvers, Dole is acknowledging influential women in food, health and wellness plus female-focused nonprofit groups working toward a healthier, more heroic world.

Launching 25 February and continuing through to 5 May, the programme combines high-powered blogger and influencer partnerships with special recipes and original content created by Dole registered dietitians (RDs) to address universal female health and wellness needs.

A campaign highlight is Captain Marvel character images on tens of millions of Dole bananas and pineapples in US and Canadian supermarkets continentwide.

According to Lisa Overman, director of marketing for Dole, the collaboration is meant to honour Captain Marvel’s distinction as the first female superhero in the Marvel Cinematic Universe to headline her own film.

“We’re applauding the women everywhere who use their powers, whether supernatural or every day, to fight for a healthier and more equitable planet," said Overman. "At the top of this list are all the female farmers, chefs, doctors, nurses, dietitians, scientists, engineers, philanthropists and others who have sacrificed over the years to give us a more fulfilling, nutritious life.”

Among the health-related female superheroes that Dole is inspired by and hopes may inspire others to everyday heroism are Abagail Adams, the first American First Lady to farm; Christine Moseley, founder and CEO of Full Harvest; Peggy Shriver, chief development officer of Rise Against Hunger; Johanna Sylvester and Jessi Greenlee, executive director and director of operations of Movement Foundation; and Elizabeth Kunz, CEO of Girls on the Run International.

“In honour of both Captain Marvel and March’s designation as Women’s History Month, Dole salutes these past and present champions of nutrition, health and wellness whose accomplishments allow us to do the work we do today,” noted Melanie Marcus, Dole’s nutrition and health communications manager.

'Superheroes in training' will be directed to nine Dole fruit and vegetable recipes selected by Marcus for specific nutrient and health benefits important to women.