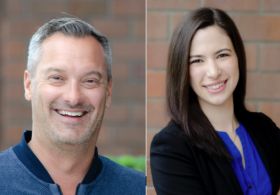 Rainier Fruit has promoted two of its sales team to key positions. Blake Belknap has been named vice president of sales while Blaine Markley becomes director of domestic sales at the Washington-based company.

Belknap has been with Rainier Fruit Company for 22 years, and was formerly director of domestic sales. In his time with the company.

“I’m blessed to work with an amazing team,” he remarked, “and in this new role, I’m looking forward to working with them to ride the rapids of tomorrow’s ag industry.”

Andy Tudor, vice president of business development, said Belknap would bring years of experience and wisdom to his new role. “We are fortunate to have great leaders like Blake making a difference on our team,” he noted.

Markley, who will fill Belknap’s former role, has been with the company for seven years, starting out in the appointment scheduling department and progressing to the domestic and export sales team before her recent promotion.

“I'm most looking forward to further engaging in the development of the company's culture, she said. “Hopefully from this new vantage point, I'll be able to help shape the growth of others as I continue to look for ways to keep growing as an individual. Of course, my ultimate goal is to be a positive impact that grows the company as a whole.”

The company’s CEO, Mark Zirkle, said Markley would bring drive and determination to her new role. “It’s impressive to see the impact that Blaine has had at our company in just seven years,” he noted.

Rainier Fruit said that the appointments demonstrated its commitment to promote from within and continue to develop talented individuals.