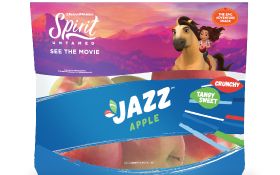 Apples are core to the story narrative of Spirit Untamed, which will hopefully encourage children and families to eat more Jazz apples and other healthy produce.

With retail partners nationwide this spring, Jazz apples will promote the film with custom package artwork that depicts two of the film’s heroes: Lucky, a headstrong girl, and the wild stallion Spirit, whom she befriends.

“We were thrilled when DreamWorks Animation approached us with this opportunity for Jazz apples,” said Cecilia Flores Paez, T&G Global’s head of marketing, North America. “Apples help forge the bond of friendship between Lucky and Spirit, and we couldn’t have asked for a better, or healthier, message to communicate with families.

"As revealed in the recent Produce for Better Health Foundation’s ‘State of the Plate’ report, nine out of ten Americans don’t eat enough fruit and vegetables each day," she continued. "Jazz apples wants to help turn this around by stirring children’s imagination and promoting Jazz as a delicious and refreshing snack.”

The film, which arrives in cinemas on 4 June , is the next chapter in DreamWorks Animation’s beloved franchise that began with the 2002 Oscar-nominated film Spirit: Stallion of the Cimarron and includes an Emmy-winning TV series.

DreamWorks Animation said it was happy to lend its support to Jazz’s vital effort to increase children’s fresh produce consumption.

In addition to co-branded packaging and in-store promotions, the partnership will drive shoppers to stores with Jazz apples on their lists, thanks to additional amplification via public relations, social media and a digital ad campaign that includes YouTube pre-roll ads.

“The partnership provides Jazz apples with a great opportunity to draw kids back to the apple category and help instill healthy habits that will last a lifetime,” Flores Paez added. “With their naturally small, snackable size and refreshingly tangy-sweet flavour, they are a prefect pick for a kids’ promotion.

"We are proud that DreamWorks Animation recognises the value Jazz apples bring to its Spirit fans, and we look forward to an ‘epic adventure’ and successful partnership this spring."