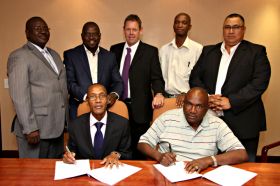 South African fresh produce company Capespan Group has secured a larger share of Namibia's grape crop while providing a welcome boost for the country's export business with the signing of a new deal with Namibian Grape Company (NGC) that aims to build on an existing ten-year cooperation agreement.

Capespan Namibia said it had concluded negotiations with NGC to extend its existing management and marketing programmes from 2018 until 2028.

Managing director André Vermaak said the crux of the new agreement was Capespan's own commitment to finance and establish an additional 114ha of table grapes and water supply to its existing 360 ha.

Vermaak said the benefits of the new agreement would be far-reaching. "Not only will it be significant to Capespan, but of greater importance is the value to Namibia and its people," he suggested.

Since signing the initial agreement five years ago, Capespan has managed to increase the vineyards' table grape export volumes from 1.2m cartons per year to 1.6m cartons, despite replanting around 45ha of planted area each year.

"Furthermore, we're intent on establishing the NGC as a large-scale table grape producer, affirming Namibian grapes as a global brand because of the outstanding quality and sought-after pre-Christmas timing," Vermaak added.

As recent interest from European investors in particular confirms, Namibia is a much sought-after source of table grapes apparently due to its pest- and disease-free status, its political stability and the fact that harvesting is significantly easier in what is usually a rain-free period.

According to Vermaak, the extended partnership with NGC will aim to grow in a socially responsible manner and should have additional benefits for Namibia, including job creation and a boost for the local economy.

Endjala confirmed that the extended marketing and management agreement presented considerable growth opportunities for all parties involved: "Capespan Namibia is building and maintaining a world-class production facility for entrusting to the NGC at the end of the term."

In 2009, Capespan established a social development trust with NGC owner the National Youth Service in order to improve quality of life for farm workers and the community in nearby Aussenkehr.

Each of the founding partners contributes N$500,000 (€47,000) per year to the trust, which has therefore been able to pass on donations to improve local schools and public services as well as fund education for disadvantaged students.