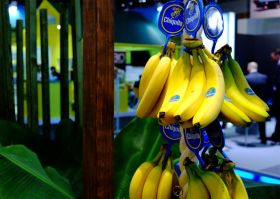 After the previously announced completion of the tender offer that saw Cutrale-Safra acquire more than 90 per cent of the outstanding common stock shares in Chiquita, the Brazilian companies consummated a so-called short-form merger under the New Jersey Business Corporation Act, with all remaining shares not tendered set to be converted into vouchers for US$14.50 in cash per share.

Shares of Chiquita common stock will no longer be listed on the New York Stock Exchange.

“We look forward to working with Chiquita to build the premier and most sustainable fresh produce platform in the industry,” said a spokesperson for Cutrale-Safra.

“The expertise of the Cutrale Group, one of the world’s most highly regarded agribusiness and juice companies, and the extensive global relationships of the Safra Group will be important strategic differentiators for Chiquita. We are confident this combination will benefit customers and consumers of the Chiquita and Fresh Express brands around the world.

The spokesperson added: “We will focus with Chiquita on strengthening its businesses and brands, including Chiquita bananas and Fresh Express salads and snacks, and enable further success in this very competitive environment through investments in the brands and operations. We bring to Chiquita a history of successful investment in the agribusiness sector; a commitment to providing customers the highest quality products and best service levels, and a focus on delivering healthy products to consumers around the world.”

Chiquita is set to continue its ongoing strategic objective of refocusing the business on core brands and strengths, while maintaining excellence in its customer relationships, the group said in a statement.

As a result of this shift in focus, and with Chiquita no longer a publicly owned company, Chiquita’s chief operating officer Brian Kocher assuming the position of interim chief executive officer, succeeding Ed Lonergan.

Executive vice-president and chief financial officer Rick Frier is also due to depart.

Cutrale-Safra expressed their appreciation to both Lonergan and Frier for their leadership of Chiquita and wished them well in their next endeavours.

Lonergan commented: “We are proud of the success of Chiquita’s ‘return to the core’ strategic plan, thank Cutrale-Safra for their support in this transition, and wish them long term success with this great company and team.”