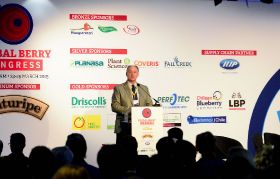 Robert Verloop speaking at the 2015 Global Berry Congress in Rotterdam

Robert Verloop has left his position as executive vice-president of marketing at Naturipe after resigning on Friday (28 October), the group has said.

Verloop, who has been with the Salinas, California-based berry giant since 2008, said that he would spend time with his family and pursue new opportunities.

"After returning from my 23rd PMA Fresh Summit, I looked over the goals we have accomplished and the objectives that we have met over the last eight-and-a-half years, and in talking with Dwight [Ferguson, CEO], we both agreed that now was the right time for me to step aside,” said Verloop. “My immediate plans are to take off some time over the holidays, work on my golf game, spend time with my family, do some travelling and volunteer work and explore new opportunities and challenges.

“It is impossible to put into words how much I have enjoyed working for the Naturipe organisation," he added. "This is a very unique business model that balances the grower needs, with those of our customers, and consumers. It has been an honour and a privilege to work alongside our distinguished growers and staff, and be part of the incredible growth Naturipe Farms has seen over the years.”

Verloop has held a number of responsibilities in his time at Naturipe, ranging from global brand management to marketing and new product development, and he recently served as the chief operating officer of subsidiary Naturipe Brands LLC.

“It’s hard to quantify all the contributions Robert made in his time at Naturipe,” said Ferguson. “His impact on our marketing and strategy at Naturipe Farms and our subsidiaries has been significant and lasting. He is leaving us well-positioned for continued success and all of us at Naturipe wish him the best in his personal and professional future.”

“Speaking on behalf of the entire Naturipe family, we thank Robert for his years of excellent service," said David Munger, chairman of the Naturipe Farms board of directors. "His contributions have made us a better company, especially for the benefit of our customers, consumers, growers and employees.”