Protofanousi Fruits’ investment in a new cherry sorting machine is expected to double productivity at the Greek company, while increasing standards 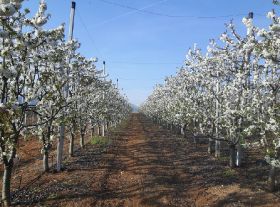 Greek exporter Protofanousi Fruits this year enters the upcoming cherry season on the back of a sizeable investment in new machinery, designed to boost productivity at the company.

“We have invested in a major project at Protofanousi,” says export director George Kallitsis. “We have acquired a new 20-lane sorter, which has the ability to grade not just by size and colour, but also by defects using special cameras. This will guarantee better outcomes when there are issues with rain, allowing us to discard the inferior fruit and ensure it doesn’t reach our customers.”

There has still been no unwelcome rain in Greece’s cherry-growing areas, and no sign of an imminent cold spell either, but celebrations at this stage would be premature.

“Everything is fine and growers are reporting no problems, but it is early,” says Kallitsis. “Rains might still affect the total crop. We expect volumes to be back to normal after last year’s smaller crop, but fruit sizes are expected to be smaller. Greece’s total cherry crop should reach around 70,000 tonnes this season.”

Kallitsis predicts early varieties like Early Lorry and Crystalina will arrive at the start of May, with the season peaking towards the end of June and the main season coming to a close around 25 July. During the roughly two-week peak in the season, Kallitsis expects half of the company’s 4,000 tonnes to be harvested, making the increased efficiencies of its new sorter invaluable.

“Our previous machine had only ten lanes and did just 4 tonnes per hour,” says Kallitsis. “The new one has a capacity of 10 tonnes an hour, more than doubling our productivity. It required an investment of €4m, including the new 2,000m2 building it is housed in. It also increases our capacity for punnets, which are popular in the Netherlands and the UK.”

Protofanousi is the biggest exporter of cherries in Greece. In addition to its main European market, Kallitsis sees potential in both the Middle East and East Asia.

“We have many potential customers in the Middle East,” he says. “Last year, production was down, so prices were a bit too high for this market, but this year should be easier. In East Asia, unfortunately the Chinese market is yet to open up for direct shipments. We will still send to Hong Kong, and there is lots of interest from markets like Malaysia, Singapore and Indonesia, so we will do some trials there with a view to sending more next year. To these markets, it takes around 15-17 days by sea, so we will be able to do cheaper shipments by sea instead of air.”