Apple exporter is Smitten with China 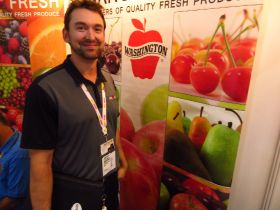 US topfruit packer Honey Bear Tree Fruit Company is set to double its production of club apple variety Smitten with fruit destined for the Chinese market.

Exhibiting at Asia Fruit Logistica this week, sales manager Brent Steensma said the company identified Smitten’s potential in China as there is already a good market for other New Zealand-bred apples, such as Envy.

The company expects 150 containers this year from production in Washington, Michigan, New York and Canada, with new plantings expected to double volumes by next season.

“I get so many enquiries through social media from consumers asking where they can buy Smitten,” said Steensma, whose company already imports and supplies the variety into the US.

To generate further consumer engagement, Honey Bear is partnering with Breast Cancer Awareness Month in the US, taking place this October, with point of sale promotion and a percentage of sales going to the charity.

“With China and the popularity of e-commerce, we think this is something that will work for the younger population, who like to try something new. We are packaging them in clam shells, which keeps them safe for online sales,” he added.