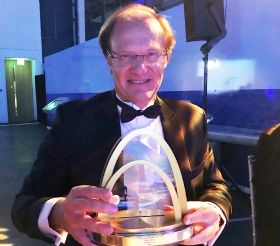 Global shipping line APL won the Container Operator of the Year at the Lloyd’s List Global Awards in London on 27 September.

The award recognises an operator that demonstrates leadership and excellence in the sector, with the best in bold, successful performance over the year.

APL one of the few profitable carriers in the shipping industry, the company said in a statement released today.

APL CEO Nicolas Sartini said the award was a badge of distinction for APL and the CMA CGM Group, which bought the shipping line last year.

“This badge of distinction affirms what we have been doing in the past year to build a more robust network, strengthen our operations and draw closer to our customers,” Sartini said. “We are grateful to the organisers and also for the support of our customers. APL is proud to stand tall today as a trusted ocean carrier and we are motivated to soar even higher and deliver value.”

The line has also added nine new loops to its network, and since joined the Ocean Alliance service as part of the CMA CGM Group, has 110 services globally.