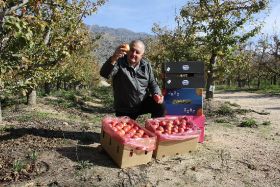 Around the world, apple producers are increasingly looking to club varieties in an environment where there is evidence of increasing production, which could perhaps bring an imbalance between supply and demand.

New varieties with characteristics not seen before, as well as improved strains of existing varieties, are all destined to feature prominently in the future of the apple business.

In some cases, the branding of varieties that meet particularly high standards is used to lift the product above what has become a commodity trade.

In South Africa, leading producer the Dutoit Group, from Ceres, is one of the growers involved with club varieties.

“New clones named Rosy Glow and Lady in Red, which are marketed under the Pink Lady Brand, are having a great impact on packouts and lead to more profitable orchards,” said Gys du Toit, director of the Dutoit Group. “The year-on-year growth in volumes of Kanzi, as young orchards come into production, shows that if you match the right cultivar with the right climate and the right market it could be highly profitable. For this variety the market is strong because of limited production and of the right guidelines emerging for an already established market and the passion of the owner of the intellectual property for this variety.”

“For us it is very important to be part of club cultivars because the owners control production and marketing," he continued. "This means that there is a better chance for these varieties to remain economically viable. It also fits in with retailers' aim of obtaining exclusivity of certain products.”

Du Toit said that it is important to use these club varieties, along with other existing cultivars, to distinguish the group from other suppliers.

“It is therefore also important for Dutoit Group to remain involved with evaluation, commercialising and marketing club varieties. In future it will become more and more important to also produce the right mix of club varieties.”

Du Toit said it was true that club varieties were mostly driven by developments in Europe and the US. “In world terms South Africa is a relatively small player in the apple market. Establishing these varieties is an expensive process and one has to achieve 12-month supply. But we are already playing an important role in this 12 month supply.”

He said noted that the control of club varieties was of vital importance in both hemispheres, pointing out that with better storage techniques, demand for standard cultivars from the Southern Hemisphere could decline.

In terms of varieties with alternative outside and inside colouring, Dutoit is part of the IFORED project, with the umbrella brand Kissabel. “Here in South Africa we are still in the evaluation phase, with various selections being considered. It is a very dynamic project and we have to make the right decisions in terms of the right climatic conditions for different selections. Only once this is done can we begin to think about the commercial phase.”

Across the spectrum of bicoloured apples there is a constant search for better selections, he added. This applies to Gala, Fuji, Braeburn and Red Delicious. These new clones and their associated marketing structures must improve on the production, packout and marketing premium of existing varieties.