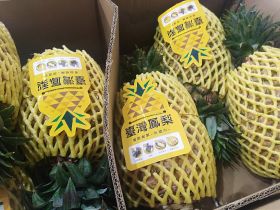 Taiwan’s Council of Agriculture will lead delegation set to visit Russia on 21 August to take part in a two-day promotion of Taiwanese agricultural products, according to local news sources.

According to a Taipei Times report, the council is eager to develop Russia as a new market as much of the produce grown in Taiwan is not available in Russia.

Ali Yang from Taiwan’s Ministry of Foreign Affairs (MOFA) told the Taipei Times that the number of Russian visitors to Taiwan in 2018 increased 85 per cent from 2017.

Yang said Russian commercial representatives were impressed with Taiwanese produce, especially mangoes, wax apples and pineapples, they were even able to take some mangoes back to Russia.

Local agricultural unions said that they support the delegation’s trip, as there could be a market in Russia in the fall for Taiwanese cabbage, the report said.

Chang Shu-yi, an official with the Ministry of Economic Affairs’ Bureau of Foreign Trade, told the Taipei Times the delegation will be meeting 20 Russian importers when it visits Moscow next week.

The bureau was also planning to invite representatives of Russian chain supermarkets to visit Taiwan in October, Chang said.