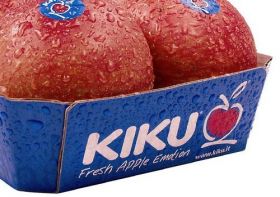 Kiku has formed the new group with four leading names in the New Zealand fresh apple export business – Applemax, Enza, DM Palmer and Pickmee – in order to work towards developing new commercial opportunities for its proprietary apple trademark, which is used to market Kiku strains of the Fuji variety.

Targeting a number of Northern Hemisphere markets through the established network of Kiku partners worldwide, the new entity will provide Kiku-branded apples for existing programmes in Europe and the US, helping to bolster year-round supplies.

However, the group is also expected to play an instrumental role in further opening the Asian market, where a limited volume of test shipments were sold last year.

With a greater volume of Kiku apples due to be exported this year, Kiku NZ is expected to bring its planted area up to 100ha shortly, with further expansion planned as sales increase.

Speaking after the meeting in Berlin, Kiku general manager Jürgen Braun said all members of Kiku NZ were looking forward to making progress with the new venture.

"We are all excited about this programme, as we will be able to offer retailers a new apple characterised by good colour, exotic flavour and optimum shelf-life," said Mr Braun. "Additionally, the apples are identified by a very nice brand. Consumers will recognise the high-quality apple in its unique blue box. The strong promotion we have done has been amazing and helped boost sales."

Kiku has enjoyed impressive and rapid expansion in the last years. Kiku-Pool Europe, which now counts a total of nine marketers in seven countries (Germany, Austria, Switzerland, Slovenia, Hungary, Greece and Italy) is expected to sell around 8,000 tonnes of Kiku fruit this season.

CMI, the master licence holder in the US, is preparing to sell its first Kiku crop this year, having granted Pennsylvania-based Rice Fruit and Applewoods of Michigan as subsidiary licensees.

In South Africa, where a total of 100ha of Kiku has already been planted, discussions with a number of marketers are reportedly close to reaching a conclusion, at which point licences will be granted.