Pakistan’s mango crop and export volumes are forecast to be up on last year, weather permitting 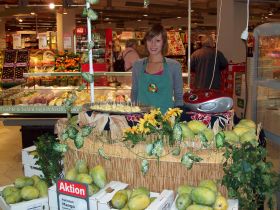 Pakistani mangoes on sale in Germany

Pakistan expects to produce around 1.9m tonnes of mangoes this season, of which 120,000 tonnes – worth US$40m – will be exported, according to the Pakistan Horticulture Development and Export Board (PHDEB).

This projected volume is up from last year when 1.7m tonnes were produced, of which 86,000 tonnes worth US$28m were sold abroad.

“The crop is expected to be bigger than last year thanks to no frost damage,” the PHDEB’s marketing manager Kashif Niazi said last week. “But the next 15 days are critical. If the climate is favourable during this fruit-setting period, a good crop may be achieved. Otherwise, we may have undesirable results.”

Exports are due to begin as usual on May 20 with early variety Sindhri, followed by Fajri and main export crop Chaunsa (which accounts for 60 per cent of export volumes).
Begum-Phali and Samar Behisht varieties are also exported, but in small quantities.

“Export prospects for this season are quite bright in view of the expected good crop; successful extended shelf life experiments which could make sea freighting mangoes possible, especially to European destinations; GlobalGAP certifications; and the establishment of Pakistan’s first Food Irradiation facility which will give us access to the US market,” Mr Niazi said.

China, Korea and South Africa are other future target markets, he added.

The provinces of Sindh and southern Punjab are the main mango growing regions in Pakistan, with Punjab accounting for 79 per cent of the total production.