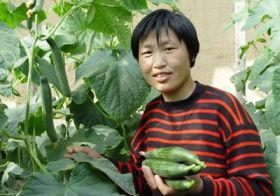 Dutch vegetable seed developer Rijk Zwaan has secured a key role in supplying a number of vegetable varieties to the Beijing Olympic Games, which starts on Friday 8 August, according to the company’s coordinator of international projects Jan Doldersum.

The company is understood to be supplying tomatoes and mini cucumbers to the Olympic Village, where more than 23,000 athletes and officials will be based during the Olympic and Paralympic Games. “Around 150km outside of Beijing, there is a special Olympic vegetable production base covering 200ha where most of the vegetables for the Olympic Village will be grown,” Mr Doldersum revealed.

The management of the Olympic farm operation has chosen Rijk Zwaan’s Beril tomato as it is the main ‘intermediate’ tomato variety grown in the area. “With Beril, they know they will have good harvest security and product quality.” Mr Doldersum said. “The operation will have around 20ha planted with the Beril variety and this means that Beril will be the main tomato to be supplied to the Olympics.”

Meanwhile, Delastar, one of Rijk Zwaan’s mini cucumber varieties, has been selected for production on a separate unit outside of the main Olympic farm. “This variety is also well adapted to the local area and it yields good quality product,” added Mr Doldersum.

China represents a significant long-term interest for Rijk Zwaan, which since 1999 has been breeding vegetables specifically for the Chinese market through its subsidiary breeding station subsidiary in Qingdao, Shandong Province.