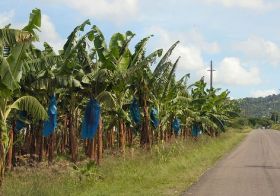 In St Lucia, the fight against Black Sigatoka goes on, with the government implementing a number of measures to reduce the threat of the disease.

According to the Caribbean Journal, the government has taken several steps to prevent Black Sigatoka's spread, after seeking help from a team of experts at the University of the West Indies.

Farmers have been aided by the approval of fungicides to spray plantations, while the Ministry of Agriculture has put together a proposal suggesting the creation of a specialist task force to fight the disease.

"The Black Sigatoka disease has become a national crisis which requires the support from the highest level and from all St Lucians, if total disaster is to be avoided," Agriculture Minister Moses Jean Baptiste told the Caribbean Journal.

"I want to re-emphasise that this situation was left to develop into a crisis proportion and this calls for urgent and decisive action," he added.