The Love Your Local Market campaign is rapidly growing into an international movement, with 16 countries so far getting involved 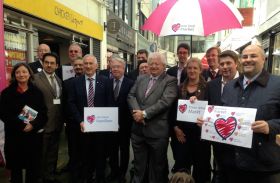 Representatives of retail and wholesale markets from across Europe descended on Brixton market in London last week to sign a memorandum of understanding in support of the Love Your Local Market (LYLM) campaign.

The campaign originally began in the UK in 2011, launched by the National Association of British Market Authorities (NABMA), but its success has led to its rapid internationalisation, greatly supported by the World Union of Wholesale Markets (WUWM).

Over 2,000 retail and wholesale markets from 16 countries are poised to come together to celebrate the positive contribution local markets offer their communities and customers, with various celebrations taking place on 15-30 May.

Many countries are expected to include local or national messages, but the international slogan for LYLM 2015 is ‘Markets Save, Markets Create’, highlighting the role that markets play in saving small and medium-sized enterprises, the environment, tradition, culture, food and money, and their role in creating jobs, fun, community and opportunities to buy fresh, healthy food at affordable prices.

According to Maarten de Graaf of HBD in the Netherlands, the main strength of markets is in providing communities with produce that is both local and fresh, citing issues such as food miles as key.

Graham Wilson, NABMA’s chief executive, said he had been taken aback at just how rapidly the campaign had taken off. “It’s a phenomenal development from a standing start just three years ago,” he said. “There are now thousands of events planned. And this has all happened through social media, which is funny as markets have been criticised for not keeping up with the times. It’s fantastic to see such enthusiasm. We expect the campaign to grow even more next year.”

“The first target this year was to create a critical mass in terms of the number of markets involved,” said Jean-Paul Auguste of Group Geraud, the largest operator of local authority markets in Europe. “We need to identify the strengths and positives this year and use these to get other markets involved.”

“The most important thing,” said Frank Willhausen, consultant at Frischemärkte in Germany, “is to raise awareness about markets. The growth of large German retailers has made it hard for markets to compete. This kind of campaign can change that.”

Manuel Estrada-Nora, WUWM’s chairman, said that in Spain two regions, Barcelona and Galicia, had got involved, accounting for around 100 markets. “What I would like to see next year is more regions in Spain getting involved,” he said. “The municipalities are aware of the importance of retail markets. When they see the success of these campaigns, I expect many more to get involved.”