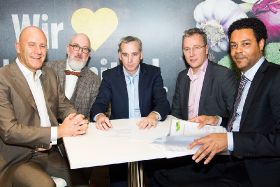 Representatives from Edeka, Greenco and The Greenery finalise the tomato deal at Fruit Logistica in Berlin

German retailer Edeka has agreed a three-year deal to source snack tomatoes produced in the Netherlands by Greenco and marketed by The Greenery.

The agreement will guarantee the supermarket chain a reliable, year-round source of mini tomatoes for its salad bars, which it began introducing to stores as a pick-and-mix concept back in 2014.

Since then, the range has been expanded to include other snack items, including mini cucumbers and mini peppers.

Noticeably sweeter than other tomatoes, the fruit went on to be marketed as Tommies, one of European fresh produce industry’s first snack brands aimed primarily at children.