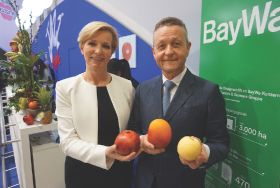 German group BayWa has set an eye-catching annual revenue target of €1.5bn for its European fresh produce business, a goal it aims to achieve within the next two years.

The group recently acquired a 68.4 share in Netherlands-based exotics supplier TFC Holland for €28.7m (subject to regulatory approval), making what may eventually be seen as the first step to becoming one of the world’s largest and most diversified fresh produce suppliers

The company intends to reach its new annual sales target through a combination of organic growth and, where appropriate, further acquisitions.

In short, it intends to become a much bigger, more international fruit trading service provider, as chairman Klaus Josef Lutz explained in an exclusive interview with EUROFRUIT.

“I see a goal of €1.5bn in revenue that is possible to reach in a couple of years. Right now, including the new company, it’s around €600m,” he revealed.

“I wouldn’t completely rule out that we are willing to take over an orchard or whatever in Latin America, but only if that were necessary to make sure we have enough volume to be traded in Europe.”

Speaking in the March 2016 issue of Eurofruit, BayWa’s fruit division general manager Christiane Bell said the TFC Holland deal was an exciting move that underlined the group’s approach to expanding its current activities in Europe, which are focused primarily on the production and export of topfruit out of Germany.

For Bell, the exotics market offers many different opportunities to grow: “I think it’s actually more than just that one segment,” she said.

“Yes it’s exotic fruit, but it’s also ready-to-eat. I think you need to make the distinction between the two. I feel we are adding true value to the customer if we stretch our activity in that respect.”

BayWa hopes to use TFC’s sourcing capacity to expand its market share in the retail business, both in Germany and across Europe.

It also expects to build new supply lines for European fruit to customers in Asia, linking with its T&G division to grow sales there.

To read the full interview with Lutz and Bell, please order a copy of Eurofruit March 2016 by contacting the subscriptions department here.

Alternatively, you can read the magazine in digital format by subscribing to EUROFRUIT via the iTunes Store and purchasing a digital subscription.