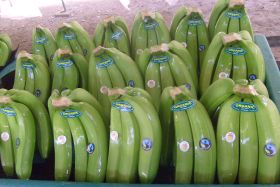 Peruvian banana exports reached a record US$128.8m the first ten months of 2016, an increase of seven per cent on the year-earlier period.

Exporter association Adex said strong international demand for organic bananas and new production areas in the north of the country were behind the rise. Piura, Tumbes and Lambayeque have all seen a surge in new plantings in recent years.

The Netherlands was the leading destination, absorbing US$43.3m or 33.6 per cent of the total volume, an increase of 8.8 per cent on 2015. However shipments to the US, Peru’s second biggest market, contracted by 11.3 per cent to US$38.9m.

“Prices have risen in the past five years, reflecting the increasingly dynamic market, and this makes organic bananas an interesting option for a growing number of Peruvian producers,” Adex said in a statement.

Cavendish Valery is the main variety grown for export, but plantains and Manzanito are also cultivated. Production is year-round, with volumes peaking between November and March.