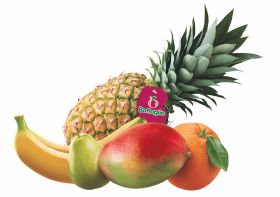 Italian fresh produce company Battaglio has unveiled a new corporate identity that it says will help to reinvigorate consumer interest in fresh fruit and vegetables while reflecting its desire to keep meeting the growing demand for fresh produce it sees in the market.

The new image, which incorporates a marketing slogan 'Fruit to Live', is said to reflect the company’s “enthusiasm, creativity and energy” as it marks four-and-a-half decades of growth in the international fresh produce business.

From its modest origins as a trader on the Turin wholesale market, the company has become one of Italy’s leading fresh fruit importers, as well as a key player on the international fresh produce market with its own operations in Argentina.

The arrival of what its head of marketing Stefano Minola refers to as ‘Battaglio 4.0’, is a significant step in the group’s development.

Handling around 160,000 tonnes of fruit from the Southern Hemisphere each year – mainly exotics, especially bananas and pineapples but also citrus, grapes, melons, kiwifruit and pears – the company is now a major service provider to the modern retail trade, which currently accounts for 80 per cent of its annual traded volume. In 2017, it expects to see its overall revenue rise by around 15 per cent to €180m.

The vitality of its business is very much the result of the energy it has put into developing its network of suppliers and customers in recent years, Minola says.

“The company’s new image is conveyed by the logo and how it is used, combining the values of enthusiasm, creativity and energy that Battaglio expresses every day through the quality of its products and its services,” he explains.

“We’re introducing a strong and memorable icon that sums up the history of the brand: a shape reminiscent of a planisphere and, at the same time, the outline of a fruit composed of fruits originating from all over the world in their bright and vibrant colours; and at the centre, Battaglio’s initial in the new colour code, the new identity’s beating heart.”