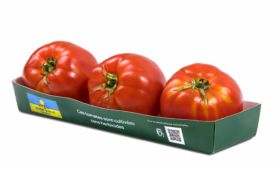 French retailer has revealed it is using blockchain technology to ensure greater traceability for fresh tomatoes.

Starting with a single product, Filière Qualitè-branded Cauralina coeur de boeuf tomatoes, the company is extending its blockchain trial after applying the technology for the first time in March for another Filière Qualitè product, namely Auvergne chicken.

Describing the move as one designed “to ensure the transparency and traceability which will help Carrefour become the leader of the food transition for everyone”, the retailer said it had been working with tomato supplier Les Paysans de Rougeline since 2015 to support “local, innovative and sustainable agriculture”.

“This three-year long partnership meets a set of specifications based on agricultural practices that are less harmful to the environment – no herbicides are used – enabling nine Marmande- and Roussillon-based producers to sell a fleshy and juicy variety of tomato grown in the ground,” said a spokesperson.

According to Carrefour, blockchain’s secure digital database ensures information submitted or amended by users – producers, processors and distributors – cannot be falsified. As such, it provides consumers with “guaranteed, complete traceability”.

For the latest trial, this year around 250 tonnes of tomatoes will be labelled with a QR Code that shoppers scan using their smartphones in order to access information about the tomato, such as where it was grown, the name of the producer, the farming methods used or the date it was planted.

“Producers can use the technology to showcase their local expertise and their commitment to a better form of agriculture,” the spokesperson added.