The prolonged summer heat wave has produced earlier, shorter Conference pears in Belgium, but nothing is expected to derail the variety’s growing popularity 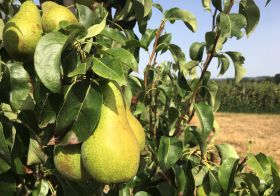 Late flowering over the spring prompted Belgium’s Conference pear producers to prepare for a delayed start to the season. Little did they know, a supercharged summer was on its way that would more than make up for any time lost. On 8 August, several days earlier than normal, the first Conference pears of the European season were harvested.

“We are packing first for local European markets, including Belgium, the Netherlands, Germany and Spain,” says Marc Evrard, commercial director at cooperative BFV (Belgian Fruit Valley). “We forecast a Belgian production volume of 317,000 tonnes of pears. This is around 15 per cent smaller than expected due to the high summer temperatures, which have resulted in the production of shorter fruit. Thanks to the fine weather conditions of the last two months, the pears will be loaded with sugars and hence full of flavour.”

As apple production diminishes in Belgium, pears are on the rise, with the Conference representing 95 per cent of the volume. “Apples are seeing a decline due to global overproduction and fierce competition from Poland,” says Evrard. “They are very easy to grow compared with pears, which are less suitable for production in many regions, since the trees don’t like excessive temperatures and are more susceptible to disease.”

According to Miguel Demaeght, sales manager for fruit at Belgian cooperative BelOrta, Conference pears have survived the drought thanks to the region’s extremely fertile, loamy soils and the good availability of water. “This is why Conference pear production cannot be replicated everywhere,” he says. “You need exactly the right climate and soil.”

In Belgium, the average yield for Conference pears is 45 tonnes per hectare, a considerable improvement on the 20-25 tonne average elsewhere in Europe. More important still, demand for the Conference is on the rise, with consumers from China to Brazil warming to the variety.

In 2017, BFV sold more Conference pears in China than all suppliers of other pear varieties combined, says Evrard. “This is a mark of the Conference’s popularity,” he explains. “There is also a good opportunity for us in India – China can’t send there, while the US faces big tariffs.”

The hunt for new opportunities overseas has been a major priority ever since the 2014 closure of the Russian market, which used to take almost half of Belgium’s entire pear harvest. In addition to China, Vietnam and India, Brazil is regarded as a market full of potential.

“The people we’ve been working with are enthusiastic about introducing a new fruit to the market and are patient and keen to get everything right,” says Evrard. We sent our first shipment there last December and quickly trebled the volume. This season we want to double it again.”

Belgium benefits from a relatively short transit time to Brazil, a vessel from Antwerp taking just 18 days to reach the port of Santos in São Paulo. Within a further two days, the fruit can be in the distribution centre.

“The Belgian Conference is in the early stages on the Brazilian market, but the feedback has been quite positive,” says Demaeght. “Brazilians like pears, and we are sure there is room for a variety that differs from existing ones on the market. The Conference is unique in that it can be eaten either crunchy or soft and juicy. Also, while some say that the russeted appearance is a disadvantage, this doesn’t seem to be an issue in Brazil.”