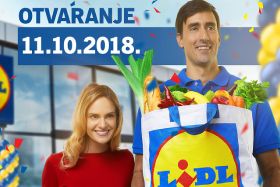 German discount chain Lidl has entered its latest European market with the simultaneous opening of 16 stores in 12 cities across Serbia, heralding the start of an ambitious expansion plan in the Balkan country.

At a special ceremony in Belgrade, the ribbon was cut in front of Lidl’s new Vojislava Ilić Street store, marking not only the group’s arrival in Serbia but also the first time a discount chain has established an operation in the country.

The stores will offer what the retailer described as a “carefully selected” range of 1,500 products with the best price to quality ratio.

"We will offer Lidl brands, fresh fruit, vegetables, pastries from the Lidl bakery, more than 350 products from domestic producers and, above all, we will offer the most favourable consumer basket in Serbia,” commented Tomislav Šapina, general manager of Lidl Srbija.

“Today is an important day, because we are starting. But that's just the beginning,” he continued. “We are here to stay and develop together. We will listen to you, consumers, so that we can be better day by day.”

President Vucic welcomed Lidl’s arrival, suggesting that Serbia would benefit from its presence.

"Serbia is a country that gives its citizens the choice and we, thanks to Lidl, have done this today,” he said. “We offered our citizens in 12 cities across the country to buy well, but also quality.”

He also said the influence of discounters on the country’s distribution networks would be positive. “We can learn a lot from them about logistics and organisation, and I think that Lidl is one of the best at it.”

Lidl has reportedly invested a total of €205m in Serbia to date, employing more than 1,500 people in the process.