The first tomato harvest from UAE agricultural technology firm Pure Harvest is a sign of things to come, as the Gulf strives to reduce its reliance on food imports 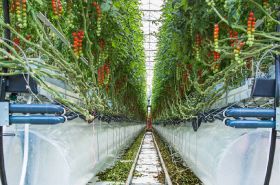 Located in Nahel, almost equidistant between Dubai and Abu Dhabi City, Pure Harvest is a pioneer in the local production of high yielding fruit and vegetables year-round, using technologies from Dutch companies including Certhon and Priva.

At a high-profile event attended by HE Mariam bint Mohammed Saeed Hareb Al Almheiri, the Minister of State for Food Security, HE Ambassador Frank Mollen representing the Netherlands, and HE Mohammed Bin Obaid Al-Mazrooei, president of the Arab Authority for Agricultural Investment and Development, Pure Harvest confirmed its commitment to addressing challenges including food security, water conservation and sustainability.

Other recent openings of greenhouses in the UAE include the Farmhouse in Ras Al Khaimah, which was established last year and aims to deliver 1.2m tonnes of sustainable, hydroponically grown, pesticide-free produce to market this year. That volume is set to rise to around 4m tonnes annually once expansion plans are completed.

Dubai’s Badia Farms, founded by Saudi expat Omar Al Jundi, is the first indoor vertical farm in the Gulf, with a growing reputation for supplying the finest micro-greens and herbs to Dubai’s top restaurants, caterers and chefs.

Finally, in Al-Ain is the Al Dahra BayWa Greenhouse, which was inaugurated in October this year. The facility is expected to produce 3,000 tonnes of tomatoes locally. The greenhouse is part of a €40m (Dh167m) joint venture between Germany’s BayWa and Abu Dhabi-based Al Dahra.

These initiatives form part of a wider strategy in the Gulf to diversify economies away from oil and increase food security, including national strategies Saudi Vision 2030 and UAE Centennial 2071.