Stronger demand noted in Germany, Asia and the Middle East for club variety grown in Piedmont and South Tyrol 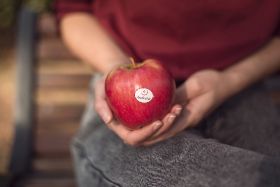 Demand for Italian-grown Ambrosia apples has held up well in the domestic and export markets this season, according to the two companies responsible for producing and marketing the club variety.

Piedmont-based Rivoira Group and South Tyrolean firm VI.P Val Venosta said they had seen an excellent response in Germany in particular, as well as positive demand in Italy, Spain, Asia and the Middle East.

Marco Rivoira, executive manager of Rivoira Group, said Ambrosia's performance this season had been all the more notable given the challenging nature of this year's European apple campaign.

"For apples it is not an easy season in general," he said, "but I must say that with Ambrosia we were able to manage quality and availability correctly from the beginning, which allowed us to maintain the commercial calendar in line with what was planned, guaranteeing the quality that customers and consumers expect."

As this season's last scheduled deliveries made their way to European customers, Rivoira said the branded fruit had done well in Italy, Spain and Germany.

"All three gave us good feedback for the development of the variety, even excellent in the case of Germany, which showed enthusiasm for the constantly growing variety and volumes."

Ambrosia apples are sold mainly in Italy, Germany, the Iberian Peninsula and Scandinavia, but sales to other markets outside Europe have been increasing and the two partners say they will continue to support those sales with a concerted marketing campaign.

Fabio Zanesco, commercial director VI.P Val Venosta, commented: "The last volumes have been sized and we are now confirming deliveries, so everything is as expected both in terms of quantity and with regard to the sales calendar."

Excellent results had also been registered in the Middle East – with both Ambrosia and another licensed variety, Gold Rosé – and in Asia, Zanesco added.

"In the coming weeks we will therefore use up the remaining fruit and then we will dedicate ourselves to planning the next campaign. Our volumes will be growing thanks to other plants entering into production, so we certainly have work to do."