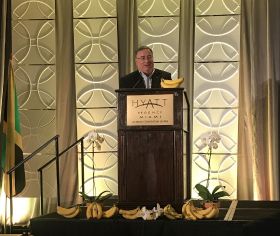 The EU’s fixation on diminishing chemical availability and reducing plastic use is threatening the global banana industry.

That was the view of Charlie Dawson, vice president for innovation, technical and regulatory at TC Transcontinental, who used his speech at the International Banana Congress in Miami this week to fire a broadside at European Commission regulators and the impact their decisions are having on suppliers.

Dawson highlighted the fact that as many as 600 chemicals are currently up for review by the EC - with a view to restriction or even a ban - including a number commonly used in the banana industry such as Clorotalonil, Mancozeb, Imazalil and Oxifluorfen, among others.

He was particularly critical of the processes used by the EC, which he claimed were often based on sentiment rather than science. “The EU says it is making decisions as a precautionary measure,” said Dawson. “It’s not based on science. It is difficult to analyse when it’s more political and emotional rather than scientific. These are new measures and are not handled bilaterally. 600 of the 800 chemicals used on crops are under review and facing elimination in the EU. This will affect the productivity in the banana plantations. It’ll cost production and employment, but the EU haven’t budged. And they say we still have to sell at the same prices.”

Dawson highlighted Black Sigatoka as an example of the kind of plant disease that will be increasingly difficult to tackle if key chemicals are removed, and called on the industry to come together to do more lobbying and put pressure on the EU to make science-based decisions. “We think the EU want to put pressure on us so we eliminate the agro-chemicals and switch to the use of organic controls. The negotiations are very complicated,” he added.

A meeting with the EU is scheduled for June 2019 in Guatemala to discuss the issue, with a further date set for July in Geneva, and Dawson said one of the biggest issues is the short notice period when chemicals are removed, which gives little time to develop an alternative.

Plastics is a further headache for the industry, according to Dawson, thanks to the EU’s commitment to eliminate single-use plastics by 2030, to be replaced by biodegradable or compostable alternatives. The development of such plastic liners and sleeves for the banana industry “takes a lot of time, investment and invention”, he pointed out, and while solutions are being sought it is a race against time that could result in the loss of fruit quality.

Dawson said his company TC Transcontinental has a number of irons in the fire to prepare for the new regulations, including new liners due to arrive in 2020.

But he warned that the EU’s stance on both plastics and chemicals could hit the consumer in the short term. “The EU must understand that there will be fruit, just not of the same grade and it will be more expensive,” he concluded.