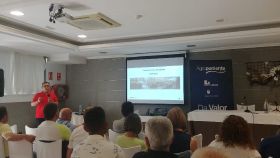 Grupo Agroponiente has almost tripled its organic acreage in the past four years and expects to see a significant rise in its production volume in the coming years.

During a meeting to analyse the results of the latest campaign, Diego Oller, the group’s head of organic production, reported that in the four years since the company launched its organic programme, planted area had risen from 100ha to 289ha, with production volume rising from 4,800 tonnes to a projected 17,240 tonnes in 2019/20.

For the coming season, the company is anticipating a bigger volume of organic aubergines and courgettes, as well as peppers, cucumbers and mini watermelons.

Oller noted that the group’s producer members were showing growing interest in organic treatments such as fertilisers, compost and Bokashi – a cocktail of microorganisms from different natural products.

The event also heard from Goyo Monsalvo, who gave a presentation outlining the future challenges of organic farming in Almería in which he predicted that growers would have to “employ new methods to fight against pests, increase biodiversity and multifunctionality, and find new ways of marketing our products to emphasis the environmental differences of our province”.

“Chemistry will never solve the problem of how to deal with our natural enemies and right now I see the conservative management of crops as being the solution,” he said.