Having announced earlier this year that it would stock exclusively Fairtrade bananas, Lidl Belgium has reintroduced Rainforest Alliance-certified fruit 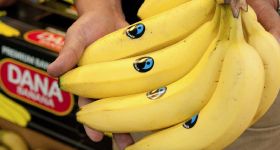 Back in April, Lidl was the first retailer in Belgium to announce that it would be shifting its banana range exclusively to Fairtrade.

However, as revealed by the Trade for Development Centre, the discounter has apparently reneged on its commitment, reintroducing Rainforest Alliance-certified bananas at the beginning of September.

Those bearing the Rainforest Alliance label are being sold at a cheaper price than Fairtrade bananas, at €1.05/kg compared with €1.25/kg.

“Looking at the Belgian market, we noticed a slight decline in sales,” said Isabelle Colbrandt, spokesperson for Lidl Belgium. “Belgian consumers were not 100 per cent ready and still prefer to have a choice, which is why we reintroduced another banana, a little less expensive but equally sustainable.”

Although similar, the two certifications have differing aims. The Rainforest Alliance is an international non-governmental organisation that works to “conserve biodiversity and ensure sustainable livelihoods for local people", whereas the Fairtrade label "guarantees good working conditions, financially supports the farmer and his community with a minimum price and a premium, and also includes a whole series of ecological criteria”.

However, Colbrandt stated that the goal of the company remained to stock exclusively Fairtrade bananas. “We are still on the road to Fairtrade,” she said. “We hope that in a few months or years we will only have fair trade bananas."

Samuel Poos, coordinator of Trade for Development Centre, said he regretted the decision. "It's a shame because it makes it a consumer decision,” he said, “and consumers are increasingly used to low prices. The Rainforest Alliance are very good in terms of the environment, but there are fewer guarantees on the price paid to the producer and there is no minimum price.”

According to Poos, this can lead to a negative economic spiral for producers, some of whom have invested significantly in Fairtrade certification.

“The lower incomes they receive do not allow them to cover the costs of environmentally friendly production,” he said, “nor do they have the means to provide the best care for the banana trees, which will eventually affect their productivity and, as a result, their income.”