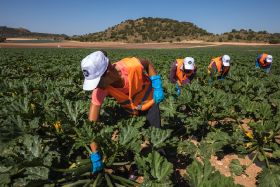 Agromediterranea has fired the starting gun for the new courgette season for both the national and international market.

The Murcian company, part of Grupo Alimentario Citrus (GAC), has made significant investments to improve the efficiency, innovation and sustainability of its production.

These include adding new capacity and improving post-harvest processes at its main packing facility in Dolores de Pacheco.

The plant currently has 2,800m2 temperature and humidity regulated chambers to store courgette, that comes from the company’s own fields.

By improving access to its loading and unloading docks and introducing an area that has been specifically adapted for courgettes, the company said it has been able to improve the quality and shelf-life of its products.

Agromediterranea’s courgettes are sold throughout Spain and Europe. The company produces a number of varieties, from the traditional green courgette to the latest innovations such as round courgette, which are sold conventionally and organically. It is currently conducting trials into new varieties at its Agronomic Innovation Centre in Valencia.

In 2018 it marketed 18,000 tonnes of courgettes, making it the biggest producer of this vegetable in Murcia. The company has 275ha of open-field and greenhouse courgette production in the Campo de Cartagena (Murcia), Albacete and Almería areas.