Casi chalks up 75 years of growth

The Almerían tomato giant has much to celebrate, with a number of new products and varieties in the pipeline 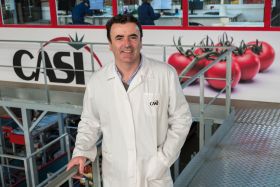 Europe’s biggest tomato cooperative is 75 years old this year and shows no sign of slowing down as it hurtles towards its first century. Throughout its history, a combination of tradition and innovation have kept the company at the forefront of the industry and it will be business as usual for the coming years, according to manager Antonio Domene.

“We are very proud to have come this far,” says Domene, who puts the company’s success down to the work of several generations of producers, employees, customers and consumers. “When we started out the cooperative had less than 100 growers and we didn’t even grow tomatoes, our star product was the potato. Today we have 2,000 growers but one thing that has not changed is the family atmosphere, that remains unwavering throughout the generations.”

Even the torrential downpours that swept through much of southern Spain this autumn have failed to put a damper on the anniversary celebrations. Domene admits that although it was a tough few weeks for growers they managed to escape heavy losses and the rains have not derailed the current campaign.

“This is a very important season for us as every year we seek to become more profitable for our partners and our customers, and this also benefits the consumer,” he explains. “We want to be able to add value by focusing on quality, so we’re looking to introduce varieties with outstanding flavour that add value to our traditional offer.”

The alliance was a first in the Spanish tomato industry and has proved hugely beneficial for the companies involved – so much so that Domene does not rule out introducing other products.

“There’s definitely scope to expand the collaboration, why not, provided the products add value. We could incorporate new tomato varieties, or other products,” he says. “This is an example of how companies can work together without losing their identity or independence.”

Horticulture is the lifeblood of Almería’s economy, generating almost 30 per cent of the region’s GDP and employing more than 200,000 people. Thanks to its soils and climate and extensive use of technology, Almería also has one of the most efficient covered agricultural models in the world.

“Our greenhouses are solar, they do not use any other energy source. Sun and wind, those are our main resources,” explains Domene. “Nor do we waste water, since it is a scarce and very precious asset for us. We work every day to improve our relationship with the environment and ensure the future of the activity and generations to come.”

Looking ahead, Domene says the company’s focus in the coming years will be on consolidating its leadership in the European tomato market and expanding into other products, such as courgettes, peppers and watermelon.

“The other two big areas we’re honing in on are sustainability and taste. We have to be increasingly responsible with our environment and we have to be more efficient and this can only be achieved with the help of R&D. And R&D will also help us to further enhance the taste of our products,” he says.

“The final area into which we’re putting a lot of effort is marketing. At Casi we know that it’s important to innovate, but just as important to communicate your efforts to the industry and to consumers.”