Amid a near-total lockdown, French fresh produce companies are doing all they can to keep shelves stocked during the coronavirus pandemic 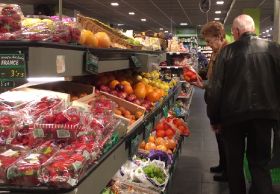 President Emmanuel Macron announced that France was entering a two-week lockdown on Monday, barring residents from leaving their homes for non-essentials, and forcing bars, restaurants, theatres and most shops to close.

The majority of supermarkets and grocery stores remain open, however, placing the focus squarely on agricultural supply chains to keep the shelves stocked.

As reported in Réussir Fruits & Légumes, Christiane Lambert, president of leading farming union FNSEA, revealed concerns over the availability of foreign labour, especially for the incipient strawberry and asparagus harvests.

“The FNSEA calls on the government to pay particular attention to the workings of the agriculture sector, which will need to hire many workers as the first harvests get started,” she said. “At a time of border closures, measures to encourage employment and administrative flexibility in agriculture are necessary and urgent.”

"The security of food supplies will be guaranteed in the days and weeks to come despite the coronavirus epidemic,” he said. "We are counting on the responsible behaviour of the French not to rush to the shelves and buy more than is necessary."

Tiendeo, a retail app that provides information on offers and promotions, revealed that searches in France for vegetables increased by 53 per cent from the first to the second week of March, while searches for canned goods rose by 13 per cent.

“However, we must reassure consumers and not cause a rush,” said the company’s Cédric Genet. “That is what leads to stock shortages. Distributors are prepared and have the stocks necessary to fill the shelves for a long period.”

Unsurprisingly, the pandemic and the response to it have caused strong growth in e-commerce sales in France, according to Nielsen. "All channels have seen an influx of consumers,” the company revealed, “but e-commerce has grown four times faster than physical stores, by 31.2 per cent compared with 8.1 per cent during the first week of March.”

Dominique Chargé, president of Coop de France, reported that absenteeism rates at French factories currently stand at around 15-20 per cent, or as high as 30 per cent in some facilities, but he insisted that French cooperatives were committed.

“We are working hour by hour to ensure continuity,” he said. “Everything is on alert. Everything is running just in time, but there is no disruption at this stage.”

The Omer-Decugis Group announced that it is continuing to run at full capacity. "Monitoring is guaranteed on all our ranges: bananas, pineapples, mangoes, passion fruit, exotic fruits, premium vegetables and organics,” the company stated. “All our shipping lines are being maintained at 100 per cent, while our airlines will adapt to demand and are very likely to regress in the coming days following the implementation of government measures.”

Meanwhile, fruit and vegetable wholesaler Vivalya confirmed that it is working "to continue to ensure the daily supply and delivery of foodstuffs throughout the country, according to the safety rules in place".

In a statement to the entire French fruit and vegetables sector, Laurent Grandin, president of Interfel, commented: “I want to bring you a message of hope, which is that we will get through this crisis together, united in solidarity.”