The company is consolidating sales of Victory, Primavera and Inspire this season 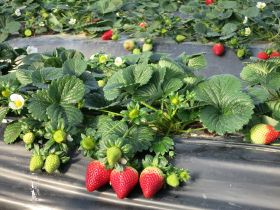 The low temperatures and cloudy days seen in southern Spain this January have led to a later-than-usual start to the strawberry season and is favouring production of rustic varieties like Victory, Primavera and Inspire, according to El Pinar.

The Segovia-based nursery has sold 175m strawberry plants this season, an increase of 15 per cent on last season. The company works with different breeding programmes, among them Plant Sciences and Berry Genetics.

Commercial director Mario Esteban said one of the advantages of the company’s programmes is that because the varietal selection is carried out locally this guarantees that the materials adapt to the production areas.

“This allows us to offer farmers materials that cover all their needs from both a productive and commercial point of view, regardless of the country or destination market,” he said.

Esteban noted that rustic varieties like Victory, Primavera, and Inspire are performing particularly well this season.

With a market share of 80 per cent, Victory is the leading strawberry variety planted in Greece, and promising trials are underway in southern Italy, Algeria and Malta, the company said.

Uptake of Inspire also continues to grow in Spain and Morocco, and the variety is performing well in the most important production areas of Italy, while Primavera is ideal for the early segment in Spain, Morocco and southern Italy, ensuring good establishment and low mortality during the harvest season.

“Another of the characteristics that best defines the company’s strawberry varieties is their rusticity, a characteristic that has become increasingly important as growers seek varieties that are easy to manage and the markets need fruit with flavour, colour and a good shelf life,” El Pinar said.

The company pointed out that Victory and Primavera are very compact plants, which simplifies harvesting and reduces the need for labour.

“From a commercial point of view, Victory is showing its excellent postharvest life, without presenting rotting problems; Inspire stands out for its exceptional flavour and shape and Primavera, an early variety with stable production until the end of the season, is ideal for different packaging format like 1kg and 2Kg punnets,” the company said.