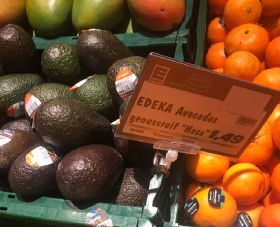 Apeel has today (31 March) announced an expanded partnership network made up of more than 20 avocado industry leaders using its plant-based protection in the US, Latin America and Europe.

In 2020 alone, avocado suppliers using Apeel made a "measurable dent" in the $2.6 trillion global food waste crisis by preventing at least 5m avocados from going to waste, the group said.

“This network of sustainability-focused suppliers has become a global force for good in the fight against food waste, unlocking opportunities and efficiencies for everyone while massively cutting waste through the supply chain, at retail and in consumers homes,” said Michael Schaeman, senior vice-president of global sales at Apeel. “Our collaboration with these incredible partners to deliver longer-lasting avocados is just the beginning of the benefits this network will be able to extend to their customers.”

Apeel Avocados are available in tens of thousands of retail locations around the world through a network of suppliers in the key growing regions that support the US and EU markets.

These include California, Mexico, Peru and Chile, as well as marketers and importers in the US and Europe.

"Household names like Index Fresh, Calavo, Del Monte and West Pak are the most recent to announce the availability of Apeel Avocados in the US, adding to an avocado supplier network that was pioneered with early partners like Horton Fruit Company, Del Rey Avocado and Nature’s Pride," Apeel outlined.

According to Apeel, its produce lasts twice as long thanks to its plant-based protection made from materials found in the skins, peels and seeds of all fruits and vegetables.

This protective extra 'peel' slows the water loss and oxidation that cause produce to go bad, and "is the only proven end-to-end solution for maintaining freshness".

"What’s more, retailers know that every purchase of longer-lasting avocados will have an impact on their shoppers’ in-home waste as well," the group continued.

This, it calculated, resukted in more than 1bn litres of water conserved and nearly 2,100 tonnes of CO2-equivalent of GHG emissions avoided.

"With the nationwide launch of Apeel avocados at our German Edeka supermarket and Netto discount stores, we are reaching a new milestone in our goal of reducing food waste step-by-step,” explained Markus Mosa, CEO of Edeka. “We also support our shoppers to make an active contribution themselves to prevent valuable food in the household from ending up in the garbage bin.”

Apeel said that its plant-based protection meant retailers could see a 23 per cent increase in marketable days for avocados between stages 4 and 5 - representing the ripeness that is most desirable for shoppers.

Across its avocado programmes, Apeel’s retail partners have experienced a 50 per cent reduction in avocado waste and an associated 10 per cent increase in sales on average.

“Once we started carrying 100 per cent Apeel produce in our stores on a consistent basis, things really took off," said Mike Roberts, director of produce operations at Harps Food Stores. "We were able to see the positive consumer response through the increase in sales.”