The frost being experienced in France, as well as in other parts of Europe, shows the need for frost protection, according to Daniel Sauvaitre 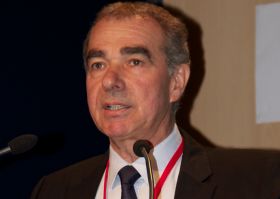 Daniel Sauvaitre, general secretary of France's Interfel and former president of the ANPP, the national apple and pear association, has provided an update on the impact of the extremely cold weather experienced in France recently, as well as in other parts of Europe.

Three nights of frost, he said, had affected virtually all apple and pear producing regions in France.

“For those of us who experience these spring frosts to varying degrees each year,” he wrote, “the struggle has been much more trying than usual.”

Orchards equipped with sprinkler facilities and sufficient water have fared better, he said, but wind towers, candles and other weaker anti-frost measures had shown their limitations.

“A large number of flowers or young fruits have frozen,” he revealed. “The abundant flowering of the year still gives hope for a harvest. This will depend on the varieties, the stages reached by the vegetation and the conditions of the pollination to come.”

In early producing regions, according to Sauvaitre, orchards that had finished flowering suffered heavy crop losses as temperatures fell to -6°C.

Prime minister Jean Castex said at the weekend that France would lift a cap on disaster compensation for farmers and that the government would use all means at its disposal to provide "exceptional funding".

Concerning the prediction of further frosts, Sauvaitre said he hoped they were less destructive. “But as every year,” he conceded, “we will have to wait until mid-May to finally be able to do the first counts and assess the coming harvest.”

He said the important thing now was to use all necessary measures to get growers through what has already been a difficult year. He added that new resources were needed to combat unusual weather extremes.

As for the issue of water availability, Sauvaitre said the priority should be to store water in the winter in order to have sufficient quantities for frost protection and irrigation in the summer.

“Let us be mobilised,” he concluded, “and united in the ordeal and in the face of all adversities.”