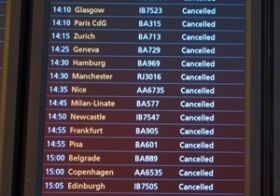 Airfreight operations across much of northern Europe have been severely disrupted by a cloud of volcanic ash, originating in Iceland, that has led to the closure of much of the region's airspace.

The customary just-in-time delivery of airfreighted fresh produce consignments is likely to be severely affected as a result, reports suggest.

The Eyjafjallajökull volcano, located in the south of the country, began erupting in March, with a second, more explosive eruption on 14 April throwing volcanic ash several kilometres into the atmosphere – resulting in an ash cloud composed of sand, glass and rock that travelled south over northern Europe on 15 and 16 April.

As a result of the potential damage that such a cloud can cause to aircraft, the use of airspace across countries including the UK, Scandinavia, France, Germany, Belgium, the Netherlands, Poland, the Czech Republic and Lithuania has been either restricted or removed, with hundreds of flights grounded.

Chris Snelling of the Freight Transport Association told Radio 4's news programme that fresh produce imports to the UK could be affected if air traffic disruptions and cancellations continued beyond the weekend.

"A lot of fresh goods are sourced from Africa, and are flown in because of their short shelf life, and you're going to immediately have problems with that not being able to get through," he said. "If this continues that could be the first impact that the public would see, in that you might see shortages of some of those goods on the shelves – salad stuffs, fruits and vegetables – if this carries on."

Sharon Wright, European director for airfreight consolidator AMI, told IFW that most airlines were still accepting bookings in the expectation that the ash cloud would clear sooner rather than later, and noted that express services – particularly to and from long-haul destinations – had been most affected.

And Damco's chief commercial officer Richard Morgan told the publication that the forwarder was looking at using sea-air services to get cargo such as that bound for Asia closer to its destination.

"We have had some airfreight delays, as everyone else has, because our aeroplanes are not in a position to fly into the UK," he said.

Experts have told the media that the volcano is still erupting, although it is no longer emitting the same level of dense ash as that produced by the 14 April eruption.

Meanwhile, several fresh produce industry figures from northern Europe due to fly back from the FRESH congress in St Petersburg, Russia, were understood to be stranded in the city after their flights home were cancelled.