Banana sales going in One Direction? 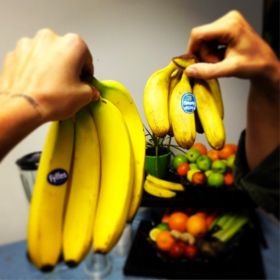 Harry Styles, one-fifth of British boy band sensations One Direction, may have done for banana sales what the industry's multinationals have been trying to do for years, after he posted a photo of a bunch of Fyffes-branded Cavendish alongside another smaller hand of Chiquita Minis to his nearly 3m Instagram followers around the globe.

Accompanied by the short but undeniably cheery comment "Baby nanas", pop music star Styles' Instagram post had already been tagged as a favourite by more than 402,000 people after just 24 hours, attracting in excess of 22,600 comments – the majority no doubt from legions of the group's teenage fans.

Fyffes' UK brand manager Paul Barrett welcomed the extra attention: "It is fantastic to get this endorsement from Harry and for our brand to appear in his photograph to such a large audience. We traditionally seem to struggle to get our brand message out to the younger generation, so this is good news."

He added: "While it is too early to tell if sales have been immediately boosted, I wouldn't be surprised if they did go up among the youth market and I'd anticipate that banana sales could possibly increase through the subconscious connection."

The impact on banana sales and the fruit's reputation among younger consumers could be considerable, especially given One Direction's enormous and loyal fanbase.

Styles has been shown in promotional videos and photographed by the press on a number of occasions eating bananas, most recently when British Radio 1 DJ Nick Grimshaw bought him one.

The two albums were also the third and fourth best-selling albums of 2012 worldwide, selling 4.5m and 4.4m units respectively.