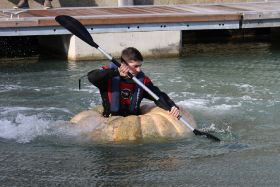 Dmitri in his paddle attempt

An intrepid artist has crossed the Solent from Gosport to the Isle of Wight in a giant pumpkin powered by an outboard motor.

Dmitri Galitzine, who sourced the 800lb (360kg) squash at the Mere Brow Giant Pumpkin Show in Lancashire, left Stokes Bay at 9am yesterday, and made the three-mile crossing to Wootton Creek in just under two hours.

The day before, Galitzine set a new world record of exactly two minutes for the fastest 100m paddle in another pumpkin - a 600lb (270kg) squash also sourced at the Mere Brow show.

The larger pumpkin was fitted with an outboard motor for crossing the Solent, while the smaller one was hollowed out for the world record paddle attempt.

A spokesperson for Guinness World Records said it had received notification of the paddle record attempt, which was recorded by independent adjudicators, and it will be examined later.

Galitzine, who creates giant vegetable sculptures influenced by English folk culture, has no sailing experience, but was supported in his pumpkin quests by Portsmouth marine entrepreneur Jonny Boys.

He plans to turn footage from the crossing into an artwork.