Hoekstra brand proves its worth 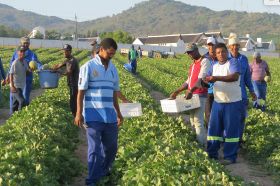 Aat Hoekstra is best known for his table grape farming and breeding programmes in and around one of South Africa’s oldest towns, Paarl, in the Berg River Valley of the Cape region. What people do not realise is that, over the years, Hoekstra has also established an iconic brand which has contributed greatly to his success.

Often referred to as the Dutch settler who arrived at the Cape with ten pounds in his pocket, Hoekstra’s modest start has grown into one of the legendary South African grape farming operations. He has a number of production sites in the central and the northern parts of Paarl, boosted by central coldstorage operations and an extremely successful export business. The name Hoekstra was turned into a brand – although, surprisingly, it was the export of melons that led the way for the business.

Under the regulations that governed South African fruit exports until 1997, Hoekstra could not export his own table grapes. He was however free to do so with melons, which was an uncontrolled fruit. The melon business to the UK and the Netherlands became a success story, while also laying the foundations for Hoekstra to establish his own table grape marketing operation as soon as the single channel business out of South Africa was lifted.

Now in his 80s, Hoekstra is firmly entrenched in the business, a smart and slick table grape operation. It stretches around the mountain, where inspired and dedicated staff walk in the footsteps of their leader. Hoekstra’s father was a flower grower in the Ntherlands but also grew table grapes in glasshouses. When Hoekstra first arrived in South Africa he had no choice but to grow flowers to make ends meet. Soon however, table grapes would follow.

Eurofruit’s visit occurred in January this year, when the vineyards on one of his farms near Windmeul at Agter-Paarl were filled with row upon row of beautifully red large berried Starlight Seedless grapes. Nearby we visited Slot van die Paarl where a heavy crop of Victoria, a white seeded variety, was ready for the harvest. Both of these, along with all the other grapes, will mostly arrive in the market in Hoekstra cartons. While elsewhere in the South African table grape industry there is almost a complete change to seedless grapes, Hoekstra has a different policy. Around 70 per cent of his production is still seeded, and these varieties deliver some of the best returns of any in the industry.

The magic seems to be in the entrepreneurial spirit one finds in the Hoekstra business. “Grapes packed in the Hoekstra brand bring a substantial premium against other grapes from the same group packed in other cartons,” commented one staff member.

Our visit could not be concluded without seeing the Hoekstra melons that started it all, being harvested and packed. The melon season was in full swing and as usual, the fruit was packed in the Hoekstra brand. It is no longer exported but the Eurofruit team tasted some of the new season crop which South African consumers have enjoyed this year. They again proved to be true to the offering of the Hoekstra brand.