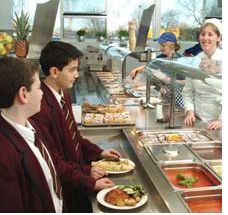 Marcus Rashford MBE and Jamie Oliver MBE have lent their support to a letter written to Prime Minister Boris Johnson calling for an urgent review of free school meals.

The letter, coordinated by the charity Food foundation and sent yesterday (14 January), calls for the government to urgently protect the 4 million children living in poverty in the UK, many of whom are not currently receiving Free School Meals.

Signed by England footballer and food poverty campaigner Marcus Rashford, celebrity chef and healthy-food-for-schools pioneer Jamie Oliver, as well as other high-profie celebrities Dame Emma Thompson, Tom Kerridge, Hugh Fearnley Whittingstall and over 40 major NGOs, charities and educational leaders, the letter calls on the government to conduct an urgent comprehensive review into free school meal policy across the UK to feed into the next spending review.

The letter, addressed to the Prime Minister and Secretary of State for Education Gavin Williamson, urges the government to review, among other things, current eligibility thresholds for Free School Meals; urgently consider how funding for Free School Meals can deliver the best nutritional impact; and explore how schools can be supported to deliver the best quality school meals.

Commenting on the letter, Anna Taylor, executive director Food Foundation said: “How our country’s most needy children are fed should be a top government priority. School food has lurched from one crisis to another in the last few months. It’s time for a root and branch review to put in place the provision needed and help our children recover from the tragedy which this pandemic has inflicted.”

A YouGov poll commissioned by the Food Foundation earlier this year found that 10 per cent of parents/guardians, affecting an estimated 1.9 million children, reported that food insecurity had affected their children in a variety of ways in the last six months forcing them to  rely on only a few kinds of low cost food to feed their children (6 per cent) and provide unbalanced meals (5 per cent), and to resort to smaller portions (1 per cent) or skipping meals entirely (2 per cent), the charity said.

The Food Foundation is a charity working to influence food policy and business practice.