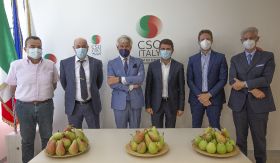 Adriano Aldrovani, president of the new consortium, says the chance to collaborate is a valuable one. "We are 25 companies that have been promoting the pear product for years, but have now decided to do it together,” he comments.