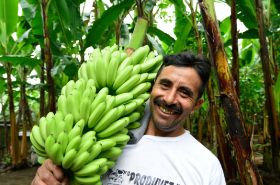 “The threat to the future of many supply chains is very real and our planet’s farmers and agricultural workers are on the frontline of this global climate crisis," she added. "We must do everything to ensure they are not left behind and that they are indeed a part of the solution.”

"This report offers an amazing amount of climate data and projections that illustrate the reality of those landscapes where farmers and workers are producing under Fairtrade terms and the mounting challenges that they face if the international community continues to fail them,” Solís outlined.

Nevertheless, Solís noted that the magnitude of the climate crisis called for “more and wider partnerships to support farmers to jointly face the massive challenges ahead".