Driscoll’s president Kevin Murphy has been announced as the new CEO of Driscoll’s, succeeding Miles Reiter 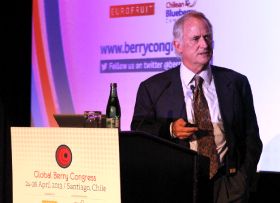 Global berry distributor Driscoll’s has announced that Miles Reiter will step down as CEO after 15 years in the position.

Current president and COO Kevin Murphy will succeed Reiter from 1 April 2015, bringing more than 20 years of business and agriculture experience.

“Given our intention to become the world’s berry company, we are very fortunate to have a leader of Kevin’s calibre,” said Reiter in a company statement.

Murphy joined Driscoll’s in 2008 as head of North America’s supply and operations, before being promoted to president in COO in 2013

“Under the CEO leadership of Miles, the company has grown tremendously over the last 15 years,” said Murphy. “My goal is to continue shaping our path forward and to focus on guiding the vision, mission and values that are the foundation to our company.”

As a fourth generation grower, and grandson of one of the founders of Driscoll’s, Reiter will continue in his role as chairman, which he has held since 1988.